Have you ever heard about kayak polo? Me neither… at least till last Sunday, when we took canoe tour around the lake and the guide told us, that we can come to try it next day. OK, why not 🙂

In a nutshell, Kayak polo is played in kayaks (I bet you didn´t think this 🙂 ) on the playground in the water. There are 2 nets in the air, where we have to throw the balloon (shoot the goal). Usually it´s played with 5×5 players.

There were 3 my friends with me – Marie from Germany, Elli from Austria and Sophie from France. We got whole equipment consisting of life-saving jacket, helmet, paddle, kayak and also something like a skirt for sealing the top of the kayak. Then we got some basic instruction and we went to play.

All the photos taken by Linda Kluge

At first I thought that we will play just between (complete) beginners, but there were 6 Finns with us, who play this game for quite a while. The begining was a little harder, because of learning how precisely to control the kayak and being fast, but then it became fine. We played for about 2 hours, which was quite exhausting by still going across the playground – “We have the ball, go to the front… we lost it, fast back to defend!” And also sitting in the kayak wasn´t totally comfortable. 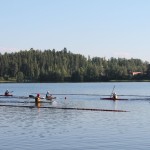 After the game we thought that we will go home, but we were invited to the sauna. For all of us it was the first chance to try sauna in Finland, so we took it. Sauna was nice relaxation after quite demanding match and swimming in the lake afterwards was perfect.

During the match, everybody had a helmet covering the face, so I found out that other players are about 30-40 years old after the game. They told us that they are group of friends, who play this game regularly 1-2 times a week and sometimes they take some new people to fill the number of players.

Except trying this new sport and also Finnish sauna, it was very nice evening with these Finnish people. They were very hospitable and friendly 🙂

Appendix – what to do, if you turn upside down in kayak?

There was one “funny” thing during the instruction – what to do if we get upside down (i.e. head in the water). Well, there were 2 options – put our hands out of the water and wait till somebody gets to us, so we could turn the whole kayak back by pushing of his kayak. In 10 seconds we should be back on the air and back in the game.

The other option was to pull out that “skirt” sealing the kayak and push ourselves from the boat. In this case we should be back on the air in 2 seconds, but out of the game for 3-5 minutes, because of taking the kayak back to the shore and pouring out the water. Well, 2 seconds or 10… 🙂